A couple of weeks ago my brother and I drove to Melbourne to see Paramore and catch a plane to see them the next day in Sydney. The plan seemed simple enough but man, almost everything that could have gone wrong, did. Matt’s car died in the middle of Melbourne CBD in peak hour traffic, the car was fine and then it just wasn’t. The gear box just went. Add a 2 hour delay in our already late plans. We got to Paramore about half an hour before they came on stage and I was so tense and stressed. It all melted away when the lights went down. Next morning we flew to Sydney, spent the day in Sydney CBD and my friend Rach showed us around Glebe and a few other places. I was so physically and emotionally exhausted by the end of the day, as much as I’d been looking forward to seeing my favourite band of the last 12/13 years twice in 24 hours, I wanted it to be over so we could get back to Melbourne and I could sleep in a bed and not have a deadline to be somewhere. I didn’t enjoy Sydney and I’d happily never return there. The rest of the Melbourne trip was chill and what I needed. Paramore are amazing and I hope I catch them a few times in the states this year, I’ll never get enough of seeing them.

We ate some good vegan food, saw some friends and got tattooed and hung out with my babe Nat G and it made all the stress okay. I wouldn’t say the stress was worth it, it was 2 days of almost hell. But Nat’s presence and hugs brighten my life and make everything feel a little lighter. Social media has allowed me to meet so many great people, my love included. As bad as social media can be for me at times, other times it’s okay. I just try to limit my time on there now.

Tomorrow is my last day at work ever. I’ve had a really horrible week so it’s bittersweet. I’m relieved to be leaving but I’m sad at the same time. I really love some of the people I work with and have met through there and soon I’ll be on another continent and everything will be different. I’ve been really emotional and unstable this week and I catch myself tearing up all the time, I just keep trying to push it down. I don’t think these mood stabilisers are working for me, I don’t feel like anything is stabilised. I’m still getting violently angry at myself and I feel so raw all the time. When I was on zoloft I felt kinda like I was wrapped in bubble wrap and things didn’t get to me as much but now I feel like I’m full of lightning and it almost hurts to be alive. I don’t know how else to explain that so I guess I’ll leave it at that.

This turned more negative and honest than I intended but I’m going with it, because being truthful to myself even in my struggle within myself is important. I’m just gonna post some highlights from my trip to reflect on;

After Laughter has been a really important album for me since it came out and seeing AL songs live along with a song I never thought I’d get to experience live (I Caught Myself) this tour was really emotional for me.

I’m 27 now and totally okay about it. I thought it would feel weird because I never saw myself surviving this long but I barely felt any different. Kae has decided we’re going to go to Iceland for my 30th and I’m actually excited about being able to get older and share the world with her. Somehow she just sets my soul at ease and I feel so much less restless with her around.

Yesterday was my 2 year vegan anniversary and I missed it. Again. I missed it last year too. I’ve decided to eat as many vegan doughnuts in Melbourne this week as I want as a gift to myself.

I go to Melbourne and Sydney this week for Tour Four/Paramore and I’m so excited. I haven’t seen them since they last came to Aus in 2014 and After Laughter is my favourite record they’ve ever put out, I’m really excited to see the new songs live. I’ve never been to Sydney but I’ll be going for about 24 hours. I think we’re going to roam around and check out the botanical gardens before we head to the venue.

I’ve officially given notice at my job and will be finishing up in the middle of March. It feels so weird that I’m finally leaving that place after seven years. I’m relieved and excited. I can’t wait to go to the states and be with my love. I’m excited for all the life we’ll get to experience together ❤. My life feels so much more peaceful since knowing her and I feel like the luckiest person in the world every day. 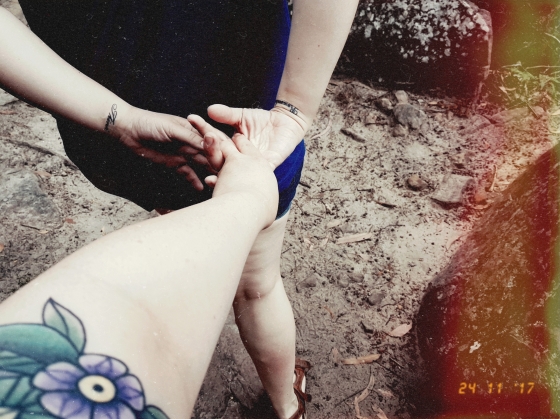